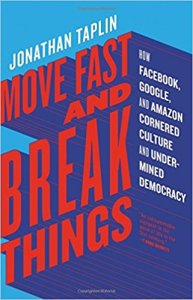 The title really says it all. In the last 10 years, there has been a massive redistribution of wealth among giant tech monopolies like Facebook, Google and Amazon. This has poured gasoline on the issue of income inequality – and has stoked the dumpster-fire that is the Presidency of Donald Trump.

Locally sustained culture and much needed jobs are being traded for low prices and convenience.

Google, Facebook and Amazon annually shortchange the US government well over $100billion, thanks to the Internet Tax Freedom Act.

To understand how these giant monopolies came to dominate Sillicon Valley and then the world, Taplin takes us back to the birth of the Internet. . . which was originally supposed to be a good idea.

Birth of the Net

For all of the libertarian lipsmacking we hear about the tyrannical oppression from government, the Internet, which has made most libertarian dreams possible, was funded by DARPA in the late 60s; aka, the US GOVERNMENT.

Pro Tip here-> The early Internet was not created by a lone genius, it was carefully researched and funded by the US government, and built by a network of wicked-smart and progressive data scientists.  It was never meant to be an IPO.

By the 70s, there are two factions within this community
– Geeks, and Counter-Cultural Humanists.

Heading into the 80s, with Apple and Steve Jobs on the scene, hackers become corporate consultants. Here, the tech world and the future Internet, meet the free-market ideology of libertarianism.

The chess wizard, math prodigy, closeted-gay genius is swept up in self-hating Libertarian ideology in the late 80s. Founds The Stanford Review, a publication which aimed to question the crippling effects of feminism, the tyrannical obsession over political correctness on campus, and fought against a multicultural society, which would subsume the powerful white man’s role. No kidding.

His book “Zero to One” on entrepreneurship, suggested everyone set-up monopolies, huge companies that would dominate the landscape. What could go wrong?

His structure was simple –

30 years ago, being Libertarian was a joke. Now it has become mainstream – it has become Silicon Valley – it has become the Republican Party. This connection is bringing darker ideas with it – anarcho-capitalists, paleo-libertarians, the need for authoritarian control. This is where the undermining democracy part comes through.

The aim of steroidal-libertarians is to destroy democracy, before it destroys us, our individual freedoms. When billionaires like Charles and David Koch start espousing this line of thinking, it sure isn’t to the benefit of the voting public. This quote from David Koch outlines the ideology that helped to secure a Trump presidency last November –

“We need a return to authoritarian rule. Democracy has led to moral decay, family breakdown, divorce, crime – Diversity is forced integration from the government, which brings concomitant social strife and racial tensions. We need a strong man to lead us.”

Thiel’s first company, PayPal is this Libertarian philosophy made real – The government can’t touch our money.

These guys are the richest people in the WORLD – they are making decisions that effect THE WORLD – and they are at the helms of the largest monopolies the world has ever seen, making the largest profits ever known. They rent out properties on their “land” and operate more and more like feudal lords than techno-future-wizards. These feudal lords establish political power in a web of bilateral individual contracts – these orgs have no conception of legitimate public political authority, nor any place for political society within their profit models.

This will be the coming battle -> A war between those who foresee a democracy that continues to uphold its obligations to its citizens regardless of their net worth, and one in which market imperatives have become so fully assimilated that the only citizens who count are those within a small sector – The definition of the word “plutocracy” is a society ruled or controlled by the small minority of the wealthiest citizens. We are right in the middle of this.

SO, AM I HATING ON LIBERTARIANS?

Yes – and in addition to that, I am questioning the concept that technology and ONE SINGLE PERSON can save the world. Superhero movies are at an all time high in American culture – and why not? We want someone to save us. The real problem is, ALL of these hyper-wealthy wackos think they can save the world.

Zuckerberg is trying to eradicate diseases and promote equality worldwide, while Facebook is supposed to bring us closer together.

Page and Thiel are working on life-extension therapies and transferring human consciousness to a database, as well as establishing “floating cities,” which are supposed to be Libertarian utopias lying outside the jurisdiction of current geopolitical reach, all the while PayPal and Google have made it easier for us to learn and get paid for our gig-economy micro-jobs.

Bezos is pushing back against Trump, funding a political takedown of sorts with his Washington Post by means of “free press,” as well as pushing for the industrialization of space, while we can get cheap eyeliner delivered to our house in hours from Amazon.

Libertarianism only works for a small group of people. For everyone else, we have to care about one another to survive, we have to cooperate. Learning to cooperate and work together is how civilization survived and thrived for thousands of years! If everyone is truly the captain of their destiny, and we have no one to depend on but ourselves, ask this question . . . 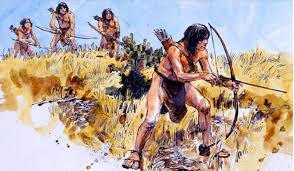 If we ALL go out hunting for, who keeps the homefire burning?

In digital economies like Google and YouTube and Facebook – orgs that trade in information – the social and marginal costs for producing and distributing more content is close to zero. Facebook pays NOTHING for the content it hosts. YouTube pays NOTHING and has millions of hours of user-generated video being uploaded everyday. This is what Taplin and other economists refer to as “zero-marginal cost economy.”  The only way to make money is to scrape everyone’s data and sell it to advertisers.

Nowhere does the fixed cost to produce more content like high quality movies, art, music get factored into the equations of Google or Facebook or YouTube. Artists and musicians will not be able to survive, because no one will have the time to keep the homefire burning, there will be no culture to maintain and pass on. Artists living in this world are more concerned with gathering a fleeting slice of a distracted marketshare, than building the foundational masterpieces that future art can build upon.

A rejection of “techno-determinism” and “techno-humanism” – a breaking up of monopolies and plutocracy! We have to get a little R&R – Resistance & Renaissance

Content creators need to get PAID – Micropayment ecosystems should be set up and existing ones encouraged, “take down-stay down” laws need to be put in place in US in as strict a fashion as Europe, mandatory “opt-in and opt-out” options to limit tracking and surveillance efforts of big data mines.

Access to Broadband Internet – The United States has a chokehold on the Internet – those with higher funds can access higher speeds thanks to monopolization efforts from TeleCom Co’s. In our digital economies, restricted access to the Internet is a form of poverty. Out of the top 50 countries in the world that offer broadband access to their population, the US is 22nd. We are behind Japan, Sweden, South Korea, Norway, Portugal, Finland.

Untether Happiness from Consumption – In his book, “Small is Beautiful: Economics as if People Mattered,” the economist EF Schumacher breaks apart the modern obsession over “happiness,” and asks us to envision a world where people actually give a shit. “The modern Western economist is used to measure the standard of living by the amount of annual consumption, assuming all the time that a man who consumes more is “better off” than consuming less. A Buddhist economist would find this irrational. Since consumption is merely a means to human well-being, the aim should be to obtain the maximum of well-being with the minimum of consumption”

The only barriers to living in this world of less consumption is Google, Amazon, and Facebook’s business models are engineered to continually arouse our desires. We market and create products that are “sticky,” that are basically addicting. So the short answer is – – –

FB, Google, Amazon Need to Change Their Biz Model – To protect our privacy and help thousands of artists create sustainable cultures for the future, the business model needs to change to honor content creators, not a few random billionaires. Facebook is about to make $20billion in annual revenue – and only 15,000 people work for that company. This is clearly adding to income inequality in such a drastic and massive fashion that the time for action and awareness is now.

These companies may seem like benevolent Plutocrats – but the time for plutocracy is over!